It’s not every Saturday morning that my Bride Mary Elizabeth exclaims “there is a goth pride fun fly at Gasworks Parks to day, I wanna go!!”. So, after a few chores off we went with a few select kites in tow.

The Goth pride group (it’s a thing, they have a Facebook group,we looked them up) had a tent set up in a shady spot at the north edge of the park. We decided to march straight up to the top of kite hill to check the wind and see if anyone was doing any flying. There were plenty of folks taking there obligatory Seattle skyline selfies, but not a single kite. I decided to try out a new kite I’d gotten from In The Breeze, the “fly hi delta”, black with a colorful mandala pattern on it. I thought perhaps it was just dark enough to draw some of the group out of their tent, I was wrong.

Since we were unsuccessful at drawing the goths out into full sun exposure we took a short kiting break for a snack. As we enjoyed our blueberries and cheesy poofs, we heard a nice man ask with an Indian accent, “are you here for the kiting event I saw on Facebook?”. We of course informed him that we were drawn to the park by the same posted event, but the organizers were safely tucked away in their tent.

After introductions were made I couldn’t help but ask him about his bag of kites. It was a white plastic garbage bag filled with a stack of Indian fighters kites and two very large spools of sewing thread. One of the spools was holding white thread while the other was filled with blue thread, the thread on the second spool was impregnated with tiny grains of broken glass and colored blue to help distinguish it from the less aggressive uncoated thread. He attached his white line to one of his kites and let it out into the wind where it immediately started into a tight right hand loop. Despite it’s unruly characteristics he was able to get a fair bit of line out and save it from a few situations that I thought for sure would have sent it nosing into the ground. He reeled it back in and decided to try one of the other kites in the stack, as he did this I decided to make an attempt at flying our large ghost kite, it is always such a crowd favorite, and the wind had picked up just enough I thought it might have a chance. 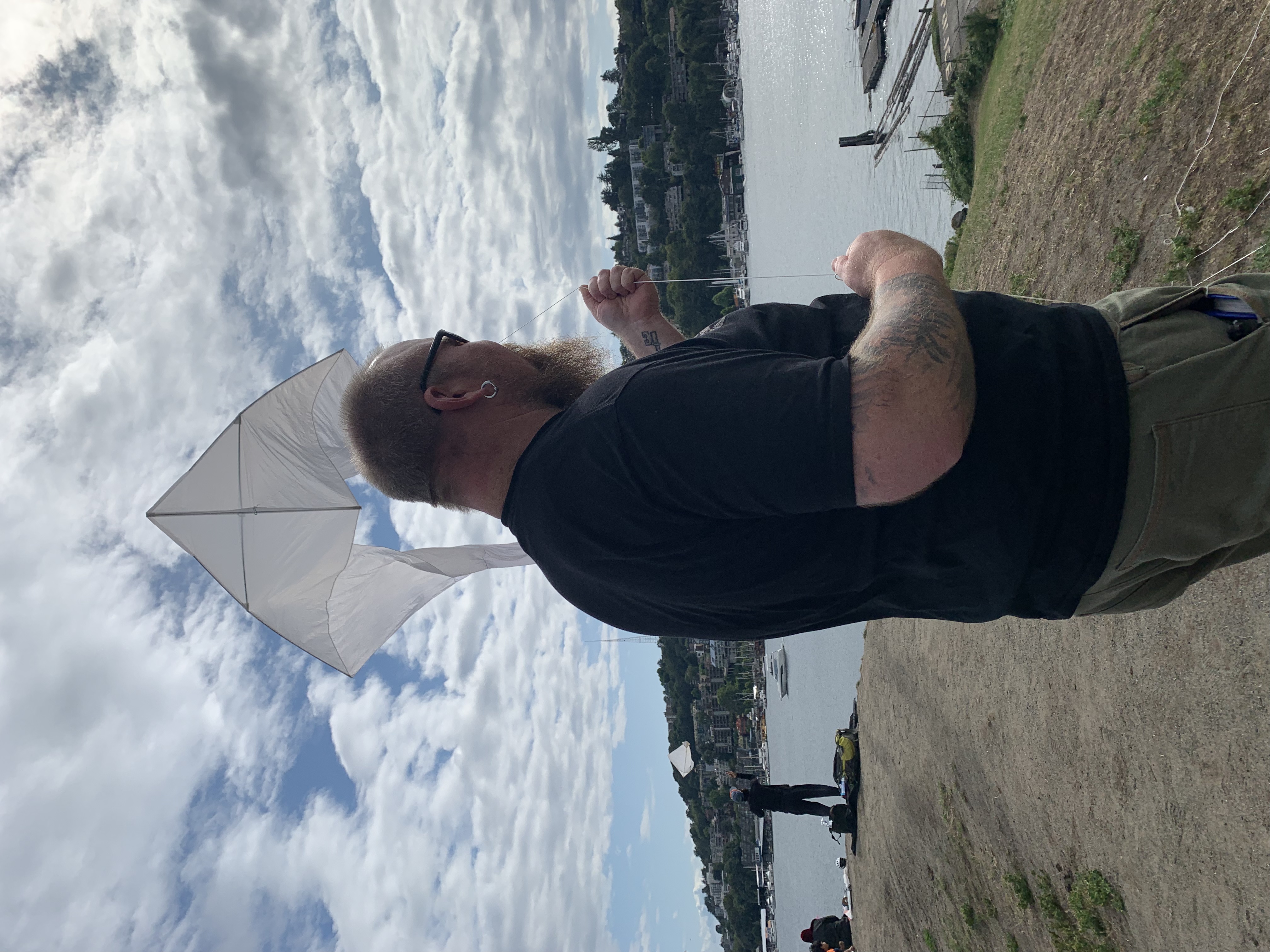 It did fly well just for a few short excursion into the sky, but it got plenty of attention. While it wasn’t enough to draw the goths out to the top of the hill a few did wander out into broad daylight and make an attempt at flying their black bat kite which up until that point had more of a figure head attached to a post of the structure then anything else. It’s flight was unfortunately unsuccessful in the protected area near the trees.

As I flew the ghost and exchanged smiles with the people enjoying the spectacle of its long flowing tails a young man proposed marriage to his partner. As they stood in an embrace glowing with joy, Mary and I decided it would be fitting they have a kite to commemorate the moment they became engaged on top of kite hill. While was reeling in the ghost she walked over and offered them a gift of one of our ITB bird kites, for which they were very grateful.

After we packed up all of our kites we watched our new kite friend, Mohamed, and visited as he flew his second much more stable kite. He explained the kite battles that he would have as a youth, the holiday in January every year where everyone takes to the rooftops to fly their kites, he told us about loosing kites, and sometimes catching a kite whose line had been severed by wrapping its line in yours and reeling it in. He explained the unwritten, but widely understood rules around the change of ownership that happens when a kite is lost by one flyer and then recovered by another.

All in all, it was a great day of kiting. I got to fly one of my all time favorite kites on a beautiful Seattle summer day in the company of my beautiful wife. Not mention that I learned a great deal about Indian kites and kite culture from a new friend, and witnessed two people deciding to take on the loving experience and challenges of marriage! Hard to believe we owe it all to the goths who we never did get a chance to meet. I suppose it is fine with them that they stay cloaked in the mysterious shadows of their tent.

One thought on “Meeting New Friends at a Goth Kite Fly Event!!”